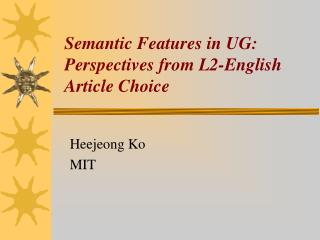 Advanced PowerPoint Features - . some general tips and techniques for those familiar with the basics of powerpoint by

The Acquisition of the English Article System by Turkish L2 Learners - . ercan yılmaz. the problem. articles are one of

PowerPoint Special Features - . to add your voice. insert movies and sounds record sound will allow you to use a

Semantic Features - . a few review exercises. semantic features. do the exercises found at: