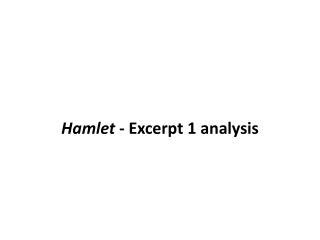 Hamlet - Excerpt 1 analysis. Par . 1:situate the excerpt in the play; say who is on stage. Shortly after the play-within-a-play has forced Claudius to face up to his guilt Hamlet has just refrained from killing the king at prayer Hamlet is about to confront his mother Hamlet Analysis - . william shakespeare. themes. themes are the fundamental and often universal ideas explored in a

Analysis of Hamlet - . by: tyler tashie. who is hamlet?. prince of denmark protagonist of the play he is next in line for

Hamlet Act 1 scene 1 - . revenge. free write. “revenge has no more quenching effect on emotions than salt water has on

Excerpt journal - . using your annotations from last class, answer the following questions: how personal are the details?

Beowulf Excerpt - . by: garrett dickerson &amp; nadi beciri. who was beowulf? beowulf was a brave warrior who sought

Analysis of excerpt from Joy Kogawa’s Obasan - . darkness cannot drive out darkness; only light can do that. hate