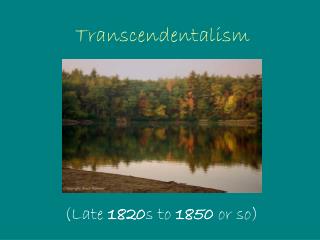 Transcendentalism. (Late 1820 s to 1850 or so). The Hudson River painters and The Luminists. Thomas Cole. Another Thomas Cole painting – notice how humans are in harmony with nature. Kindred Spirits By Asher Durand. What does “Transcendentalism” mean?.