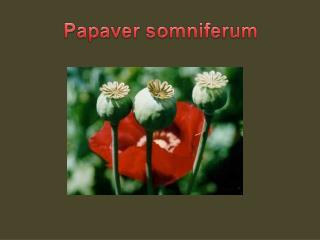 Isoquinoline Alkaloids - . opium alkaloids. many alkaloids have been identified in opium latex (opiates) - maybe as many

Poppy - . by: christian &amp; jack book by: avi. conflict. animal vs. animal! poppy and her family need to move but

The Poppy - . remembrance day. in flanders fields. http://www.youtube.com/watch?v=knpz2tvvbro. the poppy. where do

poppy - . seedpod. demerol. fentanyl. what does heroin and oxycontin look like?. heroin is mostly found in powder form,