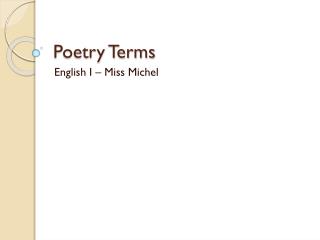 Poetry Terms . English I – Miss Michel. Speaker. The voice that is talking to us in a poem. Sometimes the speaker is identical with the poet, but often the speaker and the poet are not the same. The poet may be speaking as a child, a woman, a man, a whole people, an animal, or Poetry terms - . useful words to use when talking about poetry!. alliteration. the repetition of similar consonant sounds

Poetry Terms - . general terms. groups of lines in a poem. the brain—is wider than the sky— for—put them side

Poetry Terms - “in a poem the words should be as pleasing to the ear as the meaning is to the mind.” -- marianne

Poetry terms - . 1 ) figurative language the use of words or phrases to express something different than their usual

POETRY TERMS - . 1. imagery - the descriptive language used in literature to re-create sensory experiences. the images in

Poetry Terms - . scansion . … is the art of scanning a line or poem for meter and foot. in a structured poem, each

POETRY TERMS - . literary devices and terms associated with poetry. persona. the speaker or narrator in the poem. the

Poetry Terms - . notes and examples. verse. a line of or lines of poetry late for class i realized it was half past

Poetry Terms - . rhythm. the repetition of stressed and unstressed syllables– the poem’s beat. elegy. a poem for

Poetry Terms - . rhythm. a pattern of stressed and unstressed syllables in poetry the symbol ˊ is used for stressed

Poetry Terms - . alliteration: the repetition of sounds in a group of words as in “peter piper picked a peck of pickled