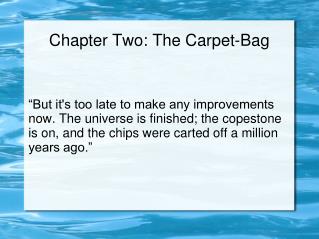 “But it's too late to make any improvements now. The universe is finished; the copestone is on, and the chips were carted off a million years ago.”. Chapter Two: The Carpet-Bag. Chapter 5 - . money management strategy. c5dn. chapter 5 begins the grades for mp4! wow! open a new do now: this is

Around the world in 80 days - . by: emma vrocher and madi knight. chapter 4