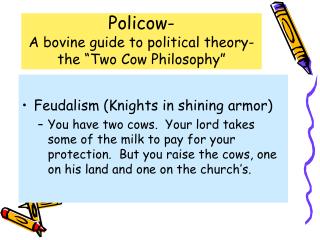 Policow- A bovine guide to political theory- the “Two Cow Philosophy”. Feudalism (Knights in shining armor) You have two cows. Your lord takes some of the milk to pay for your protection. But you raise the cows, one on his land and one on the church’s. Democracy.