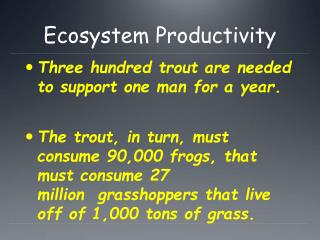 Ecosystem Productivity - . three hundred trout are needed to support one man for a year. . the trout, in turn, must

Ecosystem Productivity - . gross primary productivity ( gpp ) – the total amount of solar energy that the producers in

ECOSYSTEM - . what is an ecosystem?. an ecosystem is an interrelated system that includes all the autotrophs ,

Ecosystem - . about the speaker. java developer since the beginning true believer in open source groovy committer since

Ecosystem - . the  natural environment of  an organism . habitat. everything that surrounds and affects an animal,

Ecosystem - . a place with living and nonliving things. carbon dioxide . a gas made of carbon and oxygen atoms that

ECOSYSTEM - . ecosystem. 3 levels that make up an ecosystem individual population community is a natural unit of living

Ecosystem - . grade 5. what is a population?. a population is one species living in a specific area. for example, all

Discussion: Use of ecosystem level productivity as a fishery management tool - . new england not used in management, but

Productivity - . ratio of the amount of goods and services produced (output) per unit of productive resources used