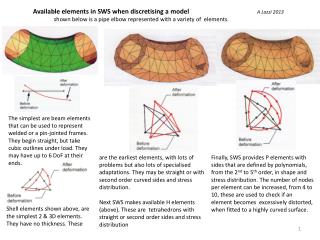 Available elements in SWS when discretising a model A Lozzi 2013 Available elements in SWS when discretising a model A Lozzi 2013 shown below is a pipe elbow represented with a variety of elements. .

Available elements in SWS when discretising a model A Lozzi 2013

Statutory Interpretation - . topic 7. reading statutes:. focus on the section break it into its elements determine the