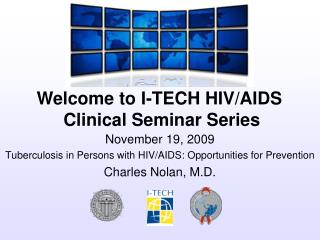 November 19, 2009 Tuberculosis in Persons with HIV/AIDS: Opportunities for Prevention November 19, 2009 Tuberculosis in Persons with HIV/AIDS: Opportunities for Prevention Charles Nolan, M.D. Case for discussion. A 22 yr old woman, recently diagnosed with HIV infection at the time of delivery of her second child, was referred for clinical and laboratory staging

November 19, 2009 Tuberculosis in Persons with HIV/AIDS: Opportunities for Prevention

Infectious and Noninfectious Conditions - . the process of infection and your body’s defenses. pathogen a

Chapter 13 - . immunity and infection. the chain of infection. links in the chain transmitted through a chain (six links)

Reflections on Priority Impact group CARE Peru June 2009 - . 1. a clearly defined goal for impact on the lives of a

Regional efforts in controlling TB: progress and challenges for future - . 2nd national conference on the national