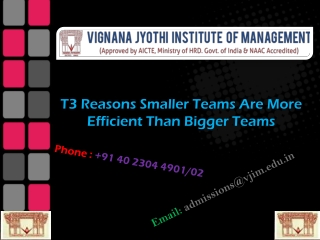 A common rule followed at Amazon, the reason behind this is pretty simple. More people means more thoughts, more communication, more politics, more chaos and more of everything that would slow the process even further. As fascinating as all of this sounds, it is indeed true. Many studies have shown that smaller teams are much more productive and faster when it comes to a particular task than a larger team.

A report called "The State of The American Workplace," has found that smaller companies often have more engaged employees. If we look into the statistics, almost 42% of the small company employees were engaged at work against only 30% of the employees at large companies. In our PGDM College in Hyderabad, we stress a lot upon team building and teaching out students to work in team.

Our professors of PGDM in Hyderabad feel that small teams work better. There are a lot of stories to back this conclusion. Below is a list of three such studies:

You must have noticed this all your life. A class at school is always divided into small groups of friends and as this group of friends increases, it tends to break further into sub groups and so on. So why this happens? A study conducted by professor Jennifer Mueller based in San Diego describes this concept as “Relational Loss.”

It says that as the size of the team increases, each individual feels less and less supported by others. A perception grows among the individuals that how would a single manager be able to provide support to such large group of people. Also how would he be able to evaluate each person properly, thus growing a sense of uncertainty that your work won’t be appreciated, thereby adversely affecting the productivity of each individual. What is a Team? - . a team is a unit of two or more people who interact and coordinate their work to accomplish a

The Internal Consulting Toolkit for HR and OD Professionals - . a guided tour. the group for organizational

Forming Teams - . or how to mix things up a bit…. topics. introduction to forming teams team selection criteria forming

Understanding Work Teams - . why have teams become so popular?. performance on complex tasks utilization of employee

Communicating in Teams and Mastering Listening and Nonverbal Communication - . improving your performance in teams.

Developing Teams - . leadership in groups &amp; teams. groups, teams, and their leadership. “we are born for

Benchmarking - . how does this process go beyond a single assessment in a middle school setting?. goals of today’s