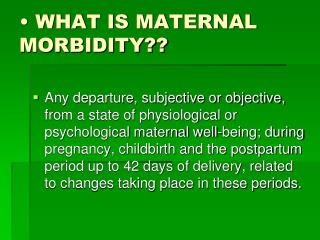 • WHAT IS MATERNAL MORBIDITY?? • WHAT IS MATERNAL MORBIDITY??. Any departure, subjective or objective, from a state of physiological or psychological maternal well-being; during pregnancy, childbirth and the postpartum period up to 42 days of delivery, related to changes taking place in these periods. .

• WHAT IS MATERNAL MORBIDITY??

Misoprostol for PAC - . task force presentations pac consortium meeting may 26, 2009. why do we care?. abortion and

Maternal &amp; Child Health and Smoking - . your name, institution, etc. here. your logo here (can paste to each

THROMBOEMBOLIC DISEASE IN PREGNANCY AND PUERPERIUM - Background epidemiology. pulmonary embolism remains one of the

Motivation : Health of mothers during reproduction critical to their families, communities, and the entire process of