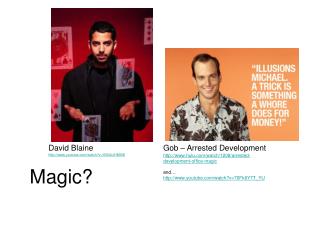 MAGICC/SCENGEN runs on a laptop computer. To obtain the software, which includes all data sets and a user manual, - T tom

MAGICC/SCENGEN 4.1 - . consultative group of experts on national communications from parties not included in annex i to

The Magics of Sight Our Vision of Vision World View of How We View Eyes, They’re Ex-SIGHT-ing - . 2d cross section of