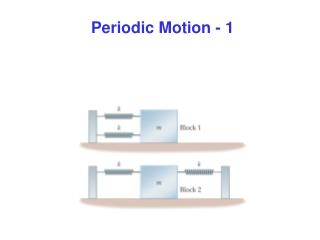 1-D Projectile Motion - Mike wilson holds the world record for the highest slam dunk. this picture shows him setting the

Chapter 1 Motion - . section 1 describing and measuring motion. motion: an object is in motion if its distance from

Longitudinal Motion 1 - . eric prebys, fnal. acceleration in periodic structures. always negative. in both cases, we can

1-Dimensional Motion - . only x or y or z coordinates east or west up or down right and left. frame of reference must be

Motion: 1-Dimensional Kinematics - . kinematics is the science of describing the motion of objects using words, diagrams,

Chapter 1 - Motion - . 1 .1 describing motion. i. essential question:. when is an object in motion?. ii. key vocabulary.

Anything with periodic motion has a frequency T1

Periodic Motion - . common example: pendulum some elements of periodic motion we can describe oscillation or cycle