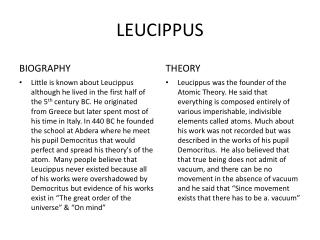 Leucippus and Democritus - . by: nicole and manpreet . leucippus. o ne of the earliest philosophers to develop atomism.

3-1 Evolution of the Atomic Theory - Go 3 describe ideas used in interpreting the chemical nature of matter, both in

Ancient Atomic Theory - . learning goals. students will: understand the improvements to the atomic model through history

ATOMISM - . theory by democritus and leucippus objects in the universe are composed of very small atoms indestructible

Atoms: The Greek Idea - ~ 450 b.c.e., leucippus and democritus atomos : point at which matter can no longer be

Democritus - . 440 bc. his idea: if you keep cutting matter in half, eventually you get a particle that you can’t cut

Democritus - . by sarah, kurri and brenna.

Democritus ’ Atomic Theory - . he believed that atoms were indivisible and indestructible. his theory had some flaws.

Evolution of Atomic Theory - . democritus/leucippus (450 bc) matter is made up of indivisible particles called these

History of the Atom - . atomism. 5 th century bc, ancient greece – leucippus, democritus both from the ionian

Models of the Atom - . review of ancient models of matter. leucippus and democritus - the idea of the “atom” – the