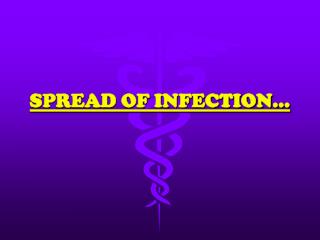 SPREAD OF INFECTION…. INTRODUCTION…. Occurrence of infectious disease is determine by the interaction of host, the organism & the environment… Odontogenic infection can originate in the dental pulp root canal of tooth periapical tissue. Infection Control - Aim of the session. to provide an introduction to infection control. student objectives. by the end

Mechanisms of Viral Entry and Spread of Infection in the Body

Infection Control for SARS - . how is sars spread?. most often spread by contact and or droplet that is, touching a

Isolation Class 10 - . last class. preventing the spread of infection. what do we do when a client has a highly

HEALTH CARE ASSOCIATED INFECTION - What is a nosocomial infection ?. an infection which is acquired during

The Chain of Infection - . as healthcare professionals, it is important to understand two things about infection :. the

Acute non-specific infection of the bone and the joints - Definitionseptic arthritis is an infection in a joint.

Unit 12 - . infection. objectives. spell and define terms. identify the most common microbes and describe some of their

Infection Control - . isolation precautions. isolation. used to prevent others from becoming infected can be emotionally

Sexually Transmitted Diseases - . lesson 63. what is a sexually transmitted infection or sti?. sti’s are infections