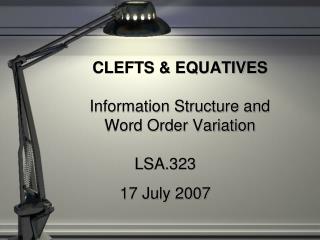 CLEFTS & EQUATIVES Information Structure and Word Order Variation. LSA.323 17 July 2007. Introduction. Clefts and equatives Clefts consist of a ‘cleft clause’ and a ‘clefted constituent’. ( It’s Chris who I like .) Equatives consist of two DP’s and a copula. ( I’m the cheeseburger .) Concrete Mix Design - . aci variation. 5% variation for adjusting mixes. pg 116. determine what is to be added or reduced

Morphology - . morphology is the field within linguistics that studies the internal structure of words. a morpheme. the

Cultural Divergence and Convergence - . c-notes . please draw in your c-note outline on pg. in your passport. you will be