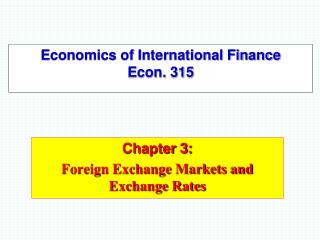 Economics of International Finance Econ. 315. Chapter 3: Foreign Exchange Markets and Exchange Rates. I. Overview The exchange rate ( also known as the foreign exchange rate, forex rate or FX rate) between two countries specify how much one currency is worth in terms of the other . [Econ 315] - . an i&gt;clicker remote is required for this course. you can purchase it through the bookstore. the