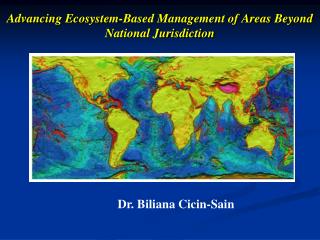 Advancing Ecosystem-Based Management of Areas Beyond National Jurisdiction. Dr. Biliana Cicin-Sain. Purpose. 1. Provide a brief overview of past and future work on areas beyond national jurisdiction of the Global Oceans Forum The 1982 United Nations Convention on the Law of the Sea - . ambassador satya n. nandan. the law of the

Results and Next Steps Presented by Dr. Biliana Cicin-Sain - . global forum on oceans, coasts, and

What is an Ecosystem? - . an ecosystem refers to the natural systems in which energy is passed from one organism to