Interculturality and intermediality in the Hindu/Jewish relationship - PowerPoint PPT Presentation 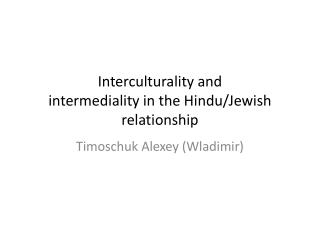 Interculturality and intermediality in the Hindu/Jewish relationship

Interculturality and intermediality in the Hindu/Jewish relationship

CORPORATE GITA Management as perceived by Bhagavad Gita - . the bhagavad gita is an ancient indian spritiual and

Assessment of Hindu Undivided Family - . by team professional times. what is an huf. hindu undivided family (huf)or a

Where is CRM headed? - What is the future of crm? it dawned on us that the customer/brand relationship will not change,

The Jewish Hymnal - This ones for all you sheep out there. the jewish hymnal. let’s rock. psalms. title: psalms means

The Therapeutic Nurse-Client Relationship - . use of therapeutic communication. self awareness &amp; nurse - client