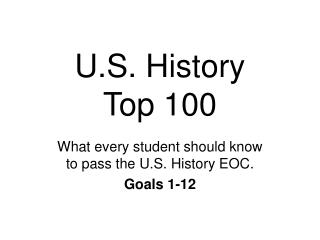 U.S. History Top 100. What every student should know to pass the U.S. History EOC. Goals 1-12. Goal 1: The New Nation (1789-1820). The learner will identify, investigate, and assess the effectiveness of the institutions of the emerging republic. Who could vote? U.S. History - . cotton gin. · it was difficult to make a profit from cotton because cottonseeds were removed by hand.

U.S. History - . standard 2. standard 2. the student will trace the ways that the economy and society of british north