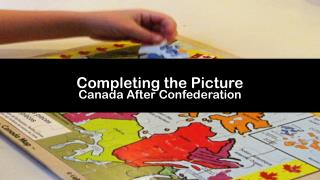 Completing the Picture Canada After Confederation

Completing the Picture Canada After Confederation. Northwest Territories. Americans (yes, them again) had purchased Alaska in 1867 and wanted more (Manifest Destiny) The Hudson's Bay Company wanted to sell, but the British government made it clear it wanted it to be sold to Canada

Completing the Picture Canada After Confederation

Confederation 1867 - . fr ee trade declared by b ritain, meaning that canadas no longer have favored status b ritain

Population during the Contemporary Period - . 1867 - present. 1867 confederation and immigration. the act of british

The Articles of Confederation - Created by mr. steve hauprich for acceleration and remediation of us history students.

O, Canada! - . the road to confederation, 1763-1867. background. much of modern-day canada first claimed by france in

Canada Expands - . the metis. the execution of thomas scott left the rest of the country feeling hostile towards louis

Canadian Confederation - The unification of a country. canadian confederation. first thing’s first ~ k-w-l. take out a

Chapter 1 - . canada in 1867. what is confederation. the process of uniting canada. the fathers of

CANADA - . brief background . who or what are the following?. queen elizabeth ii – canada’s head of state. sir john

U.S. History 5.1 Experimenting with Confederation - . in creating a new gov't after d of i, what were 2 things