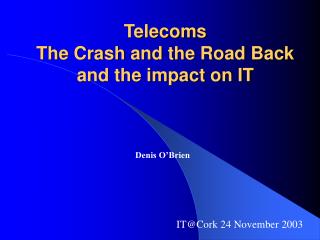 Telecoms The Crash and the Road Back and the impact on IT. Denis O’Brien. IT@Cork 24 November 2003. Context. Telecom’s Deregulation in USA in late 70s and early ‘80s.  Landmark decision by Judge Greene on 8 th January 1982.  MCI led the way legally forcing deregulation in the USA.

2014 Property &amp; Casualty Crash Course - . general info. what is the definition of insurance?. a. it is an oral

STRANGE LAWS in USA - . and some weird road signs…. alabama. « it is against the law to have an ice - cream cone in

Maniac M agee - . by jerry spinelli. chapters 1-5 questions. 1. how did jeffrey magee become an orphan?. a. his parents

Back P ain - . the back pain. if you've ever groaned, &quot;oh, my aching back!&quot;, you are not alone. back

An introduction to Impact Evaluation - . markus goldstein poverty reduction group the world bank. my question is: are we

Low Back Pain - . anca popescu, md. trivia. low back pain affects at least 80% of the general population at some point in