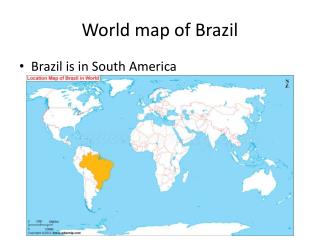 Brazil - . by kate goodwin. maps. map of continent. map of brazil. flag. the official flag of brazil was adopted on

PowerPoint Diagram Pack Maps of the World - . over 50 maps of the globe, regions, and countries – spans north america,

Brazil - . 1) introduction. what comes to mind when you think about brazil????? brazil – lush rain forests, worlds

Brazil - . the green color represents the brazilian fields. the yellow represents brazilian gold - and, by extension, the

Brazil - . where in the world!. brazil is located in south america. it's the biggest country in this continent. it's in

Brazil - . what is brazil like?. 4th and 5th class. where in the world is brazil?. task 1. locating brazil do the

Brazil - . by gisselle. the basics of brazil. almost 200 million people live in brazil. this makes it the fifth largest