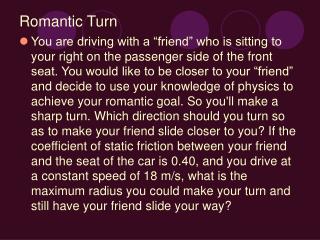 Romantic - . ro-man-tic/ r ō-’mant-ik according to webster’s new collegiate dictionary: 1. having no basis in

How Romantic - . the discovery of the british romantic hero. what’s going on???. characteristics of the romantic period

Romantic Poetry - . the english and the american. romantic poetry. mostly 1800s language of every day man (even though it

Romantic Poetry - . ap english lit. how romanticism arose. romanticism was an artistic and philosophical revolt against

Turn Left Turn Right - . “ they‘re both convinced that a sudden passion joined them. such certainty is beautiful, but