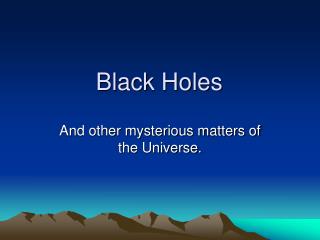 Black Holes . And other mysterious matters of the Universe. Definition of a Black Hole. “An object whose gravity is so strong that the escape velocity from it exceeds the speed of light” (Comins G-1). Speed of Light. Light travels at a speed of 1.86*10^5 km/s. Red-black trees - . outline. in this topic, we will cover: the idea behind a red-black tree defining balance insertions

Cars - Here is a fancy black limousine, but this is an old broken-down black car. you can buy cars in all different

Mr Barton’s Maths Notes - . number 11. standard form. www.mrbartonmaths.com. what is standard form and why do we need

Black holes - . philip freeman roberta tevlin. curiouser and curiouser what are black holes?. can you get there from

Black holes - . philip freeman roberta tevlin. curiouser and curiouser what are black holes?. can you get there from