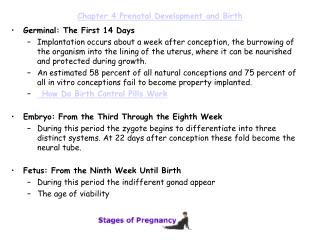 Chapter 4 Prenatal Development and Birth. Germinal: The First 14 Days Implantation occurs about a week after conception, the burrowing of the organism into the lining of the uterus, where it can be nourished and protected during growth.

Overview of Child Development - . child development. definition: change in the child that occurs over time. changes