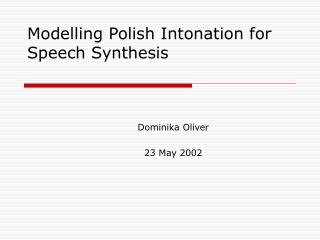 A Semantic Metalanguage for a Crosscultural Comparison of Speech Acts and Speech Genres - . anna wierzbicka department of

Multilingual HLT in Europe and the development of ASR - . louis c.w. pols institute of phonetic sciences university of

Intonation 2 - . chapter 16. what is an intonation language?. it is a language in which substituting one distinctive tone

Introduction to Speech Production - . lecture 1. phonetics and phonology. phonetics: the physical manifestation of

Intonation - . utterance 话语. what is said by any one person before or after another person begins to speak. an

Speech Synthesis Technology - . tecnología voice picking. www.softogo.com. who are we?. some of our clients: renault

Application of Speech Recognition, Synthesis, Dialog - . speech for communication. the difference between speech and

The Creation of Emotional Effects for An Arabic Speech Synthesis System - . prepared by: waleed mohamed azmy under