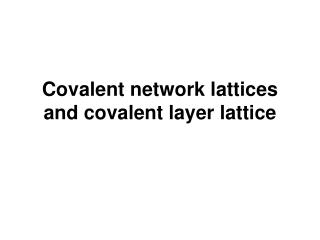 Lattice - . part of reservoir project. data source. a data source encapsulates one or more probes each probe is a well

ALLOTROPES - . ali nackers. iiiiiinfo. two or more forms of an element that have distinctly different physical or

Chapter 12: Intermolecular Attractions and the Properties of Liquids and Solids - . chemistry: the molecular nature of

Solids - . two major types: amorphous- those with much disorder in their structure. crystalline- have a regular

The Solid State - . crystals and symmetry unit cells and packing types of solid phase diagrams. solids tend to be