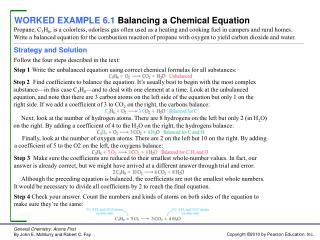 Worked Example 5.1 Balancing Chemical Reactions - . use words to explain the following equation for the reaction used

Worked Example - . how do you find the average gain needed for students as determined from a smart goal?. how to find the

Worked Example 11.1 Balancing Nuclear Reactions: Alpha Emission - . polonium-208 is one of the emitters studied by

Team A Example of a Worked Example - . how do you find the average gain needed for students as determined from a smart

CHEMICAL EQUATION - . we will read the following slides and practice problems. there will not be time to copy so don’t

Chemical Equation - . a shorthand way of reporting details of a chemical reaction reactants the starting substances in a

Worked example – Pizza supply - . here demand has shifted (an ‘increase’ in demand), and price of supply has moved

7.4 Balancing a C hemical Equation - . by: faraz , reilly, matt. definition. balancing equations- each side of the