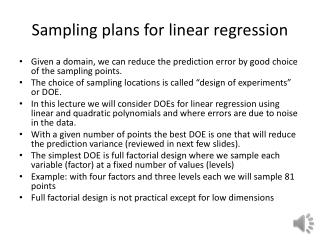 Sampling plans for linear regression. Given a domain, we can reduce the prediction error by good choice of the sampling points. The choice of sampling locations is called “design of experiments” or DOE. Chapter 13: Multiple Regression - . section 13.1: how can we use several variables to predict a response?. learning

II. Multiple Regression - . recall that for regression analysis: the data must be from a probability sample. the

I. Introduction: Simple Linear Regression - . as discussed last semester, what are the basic differences between