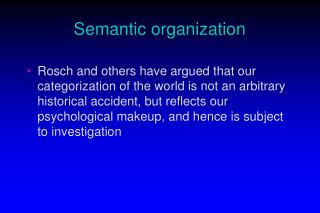 Semantic Memory Knowledge memory Main questions How do we gain knowledge? - How is our knowledge represented and

Interoperability and semantics in RDF representations of FRBR, FRAD and FRSAD - . gordon dunsire presented at the cologne

PSY 369: Psycholinguistics - . representing language. how do we turn our thoughts into a spoken or written output?. some Enterprise Information Architecture A Platform for Integrating Your Organization’s Information and Knowledge - . tom

Snapshot of Semantic Web Commercial State of the Art (presented at Science on the Semantic Web, Rutgers, October 2002)