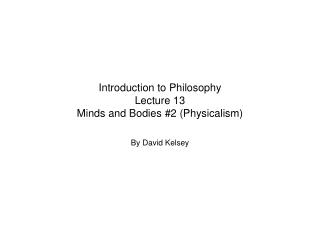 Introduction to Philosophy Lecture 13 Minds and Bodies #2 (Physicalism). By David Kelsey. Physicalism. Physicalism: Maybe we want to be physicalists instead of dualists… There are different kinds of physicalism… All Physicalists agree that everything is physical or material substance.