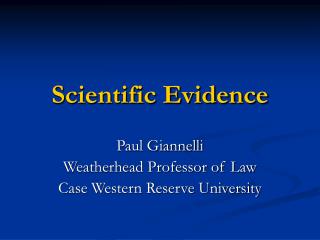 HOW TO MANAGE Electronic EVIDENCE AND discovery - . agenda . why does electronic evidence require special attention?

How Can Citizens Evaluate Scientific Evidence? - . with application to the “global warming” debate. i . what is

A Scientific Basis for Talent Identification and Elite Player Development October 2006 - . questions we asked…. is