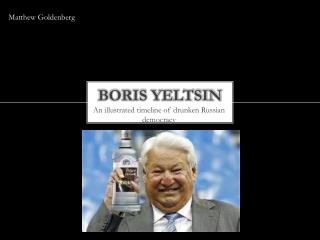 Matthew Goldenberg. Boris Yeltsin. An illustrated timeline of drunken Russian democracy. 1991. Boris Yeltsin was elected to the Congress of USSR People's Deputies in 1989 under Gorbachev, and was soon elected as the president of the Russian Federation in 1991. Coup of August 1991 and Boris Yeltsin - . presented by darion barlow. what that is???. an attempt to overthrow gorbachev,

The Rise of Democracy &amp; Boris Yeltsin - . tensions in the soviet union. as countries in eastern europe gained

What are the measures adopted by Boris Yeltsin to overcome inflation - For assignment solution contact casestudyhelp.in

Yeltsin and “Shock Therapy” - . yeltsin: president from 1991-1999. rapid shift from a command economy to a market

Boris Bellesia - This presentation have been prepared with the help of a lot of people: rudiger, hugues, antonio, mirko,