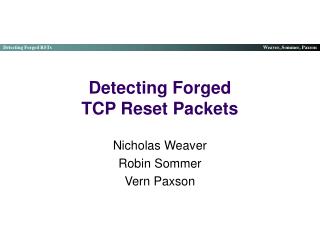 Slipping in the Window: TCP Reset Attacks - . a quick show of hands. how many bgp jockeys are here?how many of you

Forged flange - A forged flange is a metal disc, installed at the back of a tube, valve or any other object. it permits

Proportional Packets - . i am learning to solve division problems using how many times one number will go into another.

Seed Packets - . i am learning to solve simple ratio problems by repeated copying. compare one amount to another. e.g. a

Wave Packets - . recall that for a wave packet x k~1 to localize a wave to some region x we need a spread of

Forged by Fire - . what’s in a title?. what does forged mean?. write down this definition with your other vocabulary: