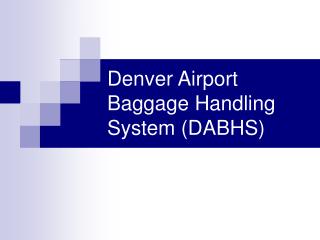 Denver Airport Baggage Handling System (DABHS). Background of DABHS. The baggage handling System was to be at the heart of the new Denver International airport.

Taxi Cab in Denver - If you are travelling to and from the airport, you will need an affordable and reliable cab service.

Denver Cab Service - Do you want to take a night out on the town with our cab service in denver? we provide taxi services

cheap-airport-ski-transfers - When you hire the geneva airport transfer services, you need to know precisely the number

Unit 18 Baggage Service - . part one: warming-up. 1. where can the arrival baggage be claimed? 2. if the passenger’s