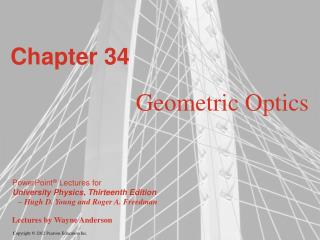 Chapter 34. Geometric Optics. Goals for Chapter 34. To see how plane and curved mirrors form images To learn how lenses form images To understand how a camera works To analyze defects in vision and how to correct them To discover how a simple magnifier works CHAPTER 34 - Click your mouse anywhere on the screen to advance the text in each slide. after the starburst appears,

Chapter 34 - . behavior. stimulus - any kind of signal, or change in the environment response - specific reaction to a

CHAPTER 34 - . fdr and the shadow of war. essential question: number one. how did the reciprocal trade agreements act of

Chapter 34 - . vertebrates. figure 34.1 the vertebrae and skull of a snake, a terrestrial vertebrate. chordates.