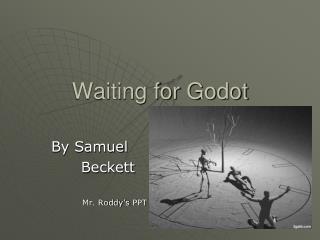 Waiting for Godot. By Samuel Beckett Mr. Roddy’s PPT. I. Introduction. Beckett’s Life His Irish ness 2. His novels and early writing His work with Joyce 4. After the War—His Plays. B. Beckett’s Ideas. The absurd—the illusion of reason

Waiting Lines and Queuing Models - . queuing theory. the study of the behavior of waiting lines importance to business

Waiting for the Rains: The Effects of Monsoons in South Asia - . write the definition of monsoon. winter &amp; summer

Waiting Lines - . students should be able to: categorize a waiting line problem as to customer population, waiting line

Waiting Here For You - . if faith can move the mountains, let the mountains move. we come with expectation, we're waiting

Samuel Beckett, 1906-1989 - . “compared with the realities of war and oppression that surround us, the gravest

Endgame – Samuel Beckett - . a play about playing the game and knowing the end. introduction. msn staging of

THE THEATRE OF THE ABSURD - . historical background. the experience of the ii world war, the shock of the atrocities of