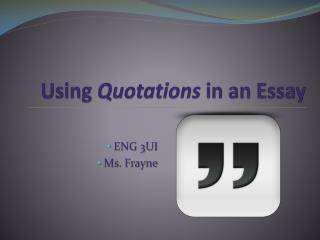 Using Quotations in an Essay Using Quotations in an Essay

The Extended Essay - . what is it? and why should i care?. the extended essay is a requirement of the diploma program.

Argumentative Essay - . ap language and composition exam. what does the argumentative essay require of you?. basically,

EXPLANATORY ESSAY - . week 2 . an explanatory essay explains or analyzes sth that the reader wishes to inform a reader

Preparing for the SAT Writing Section - . the essay. facts about the sat essay. it will be the first section on your

The Persuasive Essay - . what is a persuasive essay?. in an episode of “everybody loves raymond,” marie writes a

Expository Essay - . sophomore essay #1. choose one of the following topics: 1. life is full of momentous events that

The Persuasive Essay - . what is a persuasive essay?. in an episode of “everybody loves raymond,” marie writes a

Essay One - . part 1: writing the thesis. objectives: what you should know after having written this essay. how to write

How to Write an Essay - . the five paragraph essay. you may remember learning about this type of essay before, but here