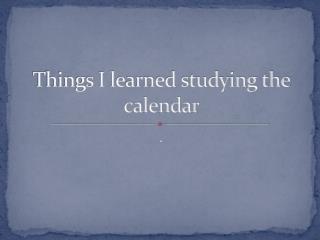 Things I learned studying the calendar

Things I learned studying the calendar. . Why study another Calendar?. I had questions that had too many answers: What date was Christ crucified? What year was the Exodus Passover? Were Adam and Eve created over 6000 years ago?

Things I learned studying the calendar Glory Science Co.,Ltd - . have lab facilities in china, hongkong, and have office in usa specialized in developing food

THE SEVEN FEASTS OF ISRAEL AND THE HEBREW CALENDAR - . crucified on passover nisan 14, 32 a.d. buried on unleavened bread

In Celebration of (Worthy) Mothers - . on mother’s day. it’s complicated. today we will celebrate mothers and the

Study Skills - . penncrest high school. do you know how to study?. ask yourself:. do you repeat what you’re trying to

Two Week Calendar - . provides a 14-day schedule of all future requests and reservations for facilities and airspace

LESSON STUDY - . teachers collaborating to improve instruction. what is lesson study?. “lesson study is really as much

What we learned last lesson? - . '3 things'. swap your three things in pairs try to get at least five significant things

Time Management - . what to do and when…. what is time management?. organizing activities and setting priorities

Inventories - 7. inventories. 0. after studying this chapter, you should be able to:. describe the importance of control