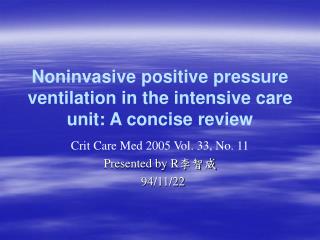 INTENSIVE CARE UNIT - . isaac asimov: “life is pleasant. death is peaceful. it is the transition that is difficult”.

NONINVASIVE POSITIVE PRESSURE VENTILATION WITH THE 7200AE VENTILATOR - . objectives. be able to list the advantages of

Noninvasive Oxygenation and Ventilation - . goals of noninvasive measures. either short term or long term support of

Continuous Positive Airway Pressure in the Neonatal Intensive Care - . level 1 mark a. willing, rrt-nps. what does it

Starting Noninvasive Ventilation - . notify respiratory therapist that there will be a patient on niv. turn ventilator