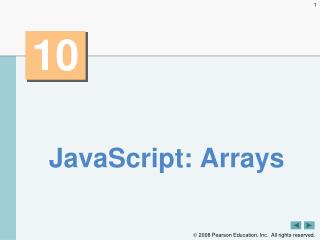 10. JavaScript: Arrays . With sobs and tears he sorted out Those of the largest size . . . —Lewis Carroll Attempt the end, and never stand to doubt; Nothing’s so hard, but search will find it out. —Robert Herrick Now go, write it before them in a table, and note it in a book. —Isaiah 30:8 Chapter 8: Arrays and the ArrayList Class - . starting out with java: from control structures through objects fourth

JavaScript - Advanced - . written by effie nadiv, edited by permission from author by amir kirsh based on work of douglas

Java script - . introduction. javascript is the most popular scripting language on the internet, and works in all major