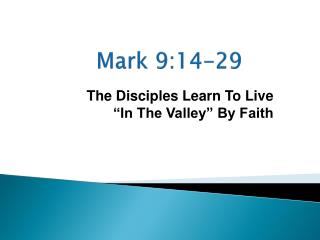 Mark 9:14-29. The Disciples Learn To Live “In The Valley” By Faith. Context: The Scribes Challenge Disciples’ Faith . Coming down the mountain : Mark 9:11 They asked Him, saying, “Why is it that the scribes say that Elijah must come first?” “In the valley :”

Jesus – hope for all people a profile of the king - . jesus miracle worker/ healer. jesus showed miricale working as

Life of Jesus - Lesson #7. chronological order. life of jesus. jesus is popular but has made enemies most teaching in the

THE GOSPEL OF MARK - . mark was written to show that jesus, as the christ and the son of god, was also the son of man who

Gospel of Mark – second lecture - . 1) the narrative agon of the gospel 2) various ways of manifesting the

Jesus the Christ - . a survey of the bible the gospels – matthew, mark, luke, and john http://kohlin.com/biblesurvey/.

THE EVANGELISTS - . mark matthew luke john. mark. written around 65-70ad written for christians living in rome they were