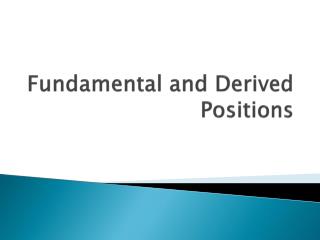 FUNDAMENTAL AND DERIVED QUANTITIES - . objectives of learning students are able to: identifier physical quantities in

Archiving; and Astrometric Positions - . archiving. important that our observations are archived – data retention

Human Positions and Posture - . human positions and posture. the position in which the parts of your body are hold

Derived Nouns and Adjectives - . prerequisite for all gcl intermediate and advanced arabic courses. prepared by cti2

Compound and Derived Lipids - . compound lipids. they are esters of fatty acids with alcohols containing additional

Initialization: Positions and velocities - . practice. 1. implement pso with gbest and lbest (ring) to compare their

Anatomical Positions and Movements - . types of movements . the body can move in many different ways, each bone’s

Archiving; and Astrometric Positions - . archiving. important that our observations are archived – data retention

Inheritance and Derived Classes - . why do we need it?. it is one of the most powerful mechanisms offered by oop. it