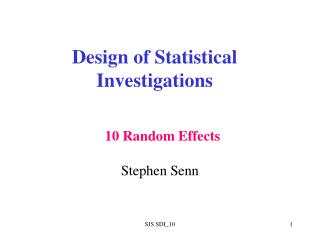 Design of Statistical Investigations. 10 Random Effects. Stephen Senn. More Than one Random Term. So far only one term has been considered to be random disturbance term It is possible to have models in which more than one source of variation is taken to be random We now consider such models.

A Broad Overview of Key Statistical Concepts - . an overview of our review. populations and samples parameters and

Statistical Experiments - . the set of all possible outcomes of an experiment is the sample space, s. each outcome of the

STATISTICAL INVESTIGATION - . meaning and definition investigation or inquiry means a search for truth, knowledge or