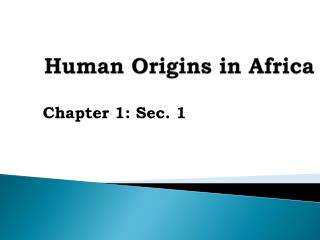 SOL Quiz 23 - . africa. 1. the earliest forms of human-like beings have been found in africa. fossils of these first

Origins of the Slave Trade out of AFRICA - . slave trade. ancient slavery under the roman empire , would not

AFRICA - . south african human rights commission the objectives are to: develop an awareness of human rights among the

Aboriginal Spirituality - . origins sacred space rituals beliefs. what do you know about natives?. origins. the first

Kingdoms of Africa - . africa is one of the earth’s seven continent. it is the second largest continent . africa is a

Out of Africa: Africa and the Origins of Humankind - . paleontologist louis leakey with australopithecine skull fossil.

Human Origins in Africa - . prehistory. definition: the time before the invention of writing - roughly 5,000 years ago.

Human Origins and Emergence of Civilization - . complete the vocabulary worksheet for the following terms: artifact

Chapter 1 - . the peopling of the world prehistory-2500 b.c. section 1: human origins in africa. scientists search for

Human Origins &amp; Culture - . take notes on the slides and some slides require you to answer a question or complete