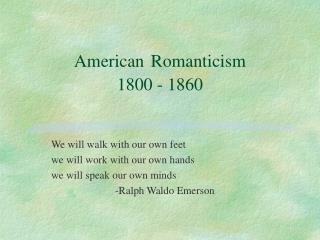 American Romanticism 1800 - 1860. We will walk with our own feet we will work with our own hands we will speak our own minds -Ralph Waldo Emerson. Political and Social Milestones. The Louisiana Purchase - 1803 The Gold Rush - 1849 Education and Reform.