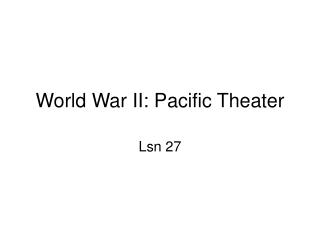 The War in the Pacific - . japan and the united states. japanese internment, 1942. relocation &amp; internment

World War II in the Pacific - . what actions did the japanese take in the months after bombing pearl harbor?. invaded

The War in the Pacific - . vs. early war in the pacific. germany main priority u.s. loses philippines u.s. retaliation

The Pacific Theater Chapter 38 Part 2 - . ap us – unit 14 world war ii. while the allies agreed that the defeat of the

Pacific Theater - . operations will be spread out over a larger area than the european theater sea power plays bigger

Allies turn the Tide -Pacific - . section 24.1 and 24.3. objectives. evaluate the importance of the battle of midway

The Pacific Theater - . credit to matthew baumann for much of the content of this powerpoint. japan begins to

Introduction to Drama and Values as Literature - . the experience of theater structure of a play and drama terms. what is