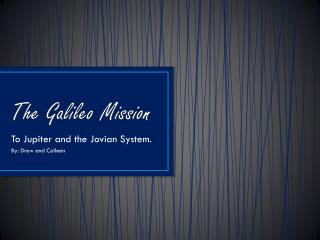 The Galileo Mission. To Jupiter and the Jovian System. By: Drew and Colleen. WHAT IS IT?. ~The Galileo Spacecraft (named after Galileo Galilei : first modern astronomer who first discovered Jupiter’s Moons in 1610)

What is Galileo’s Law of Inertia? - . only when friction is present is a force needed to keep an object moving.

Life of Galileo Context Study - . discovery of the solar system. for many thousands of years, humanity, with a few

The Galileo Mission - . what is it? the galileo was a spacecraft. it was the first jupiter orbiter and was sent in 1989.

The Galileo support to the Search and Rescue Programme (SAR/Galileo) - . outline. how sar/galileo integrate with